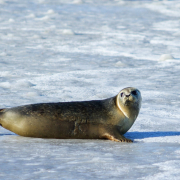 Greenhouse gases
The most important advantage of sustainable energy, of course, is that it is better for the environment. One of the major drivers for tidal stream power generation is combatting climate change by reducing the CO2 emissions by being: a 100% renewable, 100% reliable and 100% predictable energy source. Every kWh of power generated by ‘tidal’ saves ~1,000g CO2, compared to the same power generated by diesel. Diesel power generation is often used in remote island communities and has a carbon intensity of 250g/kWh which, when coupled with the relevant plant efficiency of ~25% gives an effective carbon intensity of 1,000g/kWh. Beside a significant reduction of CO2 emissions, tidal energy also contributes to a reduction in the emission of all other types of greenhouse gas, such as methane (CH4) and nitrous oxide (N2O). These gases are released during the combustion of fossil fuels, such as coal, oil, and natural gas, to produce power. In addition to greenhouse gas emissions, tidal energy has no air emissions, such as soot and fine particles, which are related to human cancer, heart and lung damage as well as mental functioning.

Noise and vibrations
The few studies that have been undertaken to date to identify the environmental impacts of a tidal power scheme have determined that each specific site is different and the impacts depend greatly upon local geography. What has been studied in the Netherlands so far? No underwater acoustic measurements have been carried out near the existing turbines in the Eastern Scheldt Storm Surge Barrier. Depending on their spectrum and source level, and on local propagation conditions, the sounds produced by the turning turbines may or may not have an effect on porpoise behaviour. However, porpoises are expected to cross the barrier only at and around slack tides, when the turbines are not moving and are thus not producing sound. If sound produced by the turning turbines is audible to the porpoises in the vicinity, it will either add an extra barrier effect, or help the porpoises to locate the turbines and thus avoid colliding with them. In the past we’ve also studied noise nearby the Tocardo turbines in the Dutch icon the Afsluitdijk; on site it appeared that the noise from the turbines was practically imperceptible.

Sea life
One of the important issues with sites were high flow rates occur is that marine mammals commonly visit and feed in these areas. During the years 2015 – 2016 no correlation with the amount of grey seals and normal seals counted (increase / decrease of numbers) in the Eastern Scheldt and the presence of tidal turbines was identified. Tocardo strives to produce fish friendly, innovative turbine solutions. In April 2019 a fish mortality was executed at the Afsluitdijk during the operations of three (3) T-1 Turbines, in front of the turbine the current velocity was 2.5 m/s. The results of the tests with smolts and silver eel are in accordance with the outcome of the model calculations, as for both species the immediate mortality is 0.00%. No turbine related injuries of fish were observed, although fish clearly interacted with the turbine blades.

Subhub
The optimized solution to have a minimum impact on the environment is by making use of a seabed mounted system so it is invisible from the surface and maintains the seascape and navigation channels of shipping, and it is beyond the diving depth of most birds. Tocardo’s business partner QED Naval has developed the Subhub platform to avoid having any negative impact on the environment: one of the key design drivers for Subhub is to minimise the environmental impact of the platform.